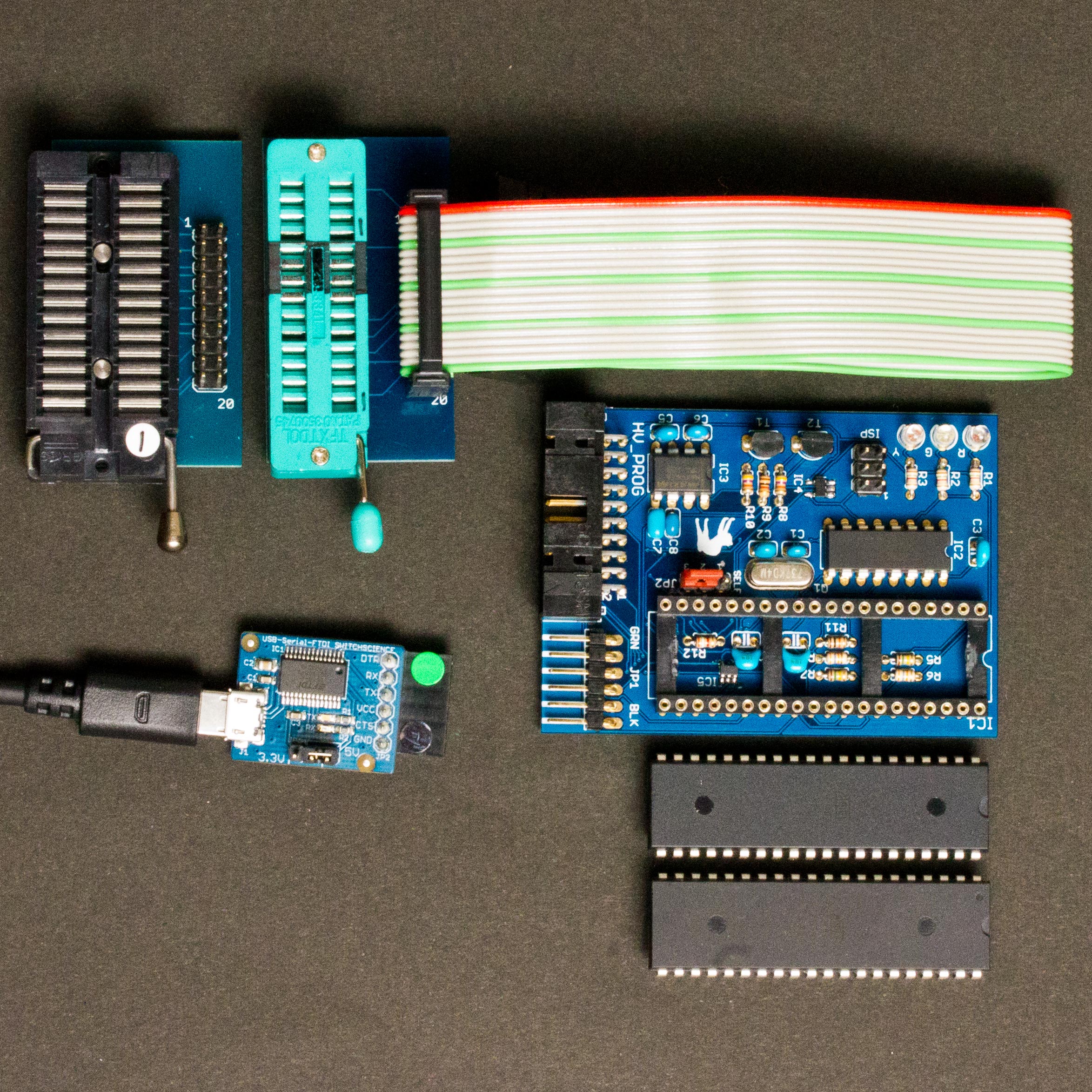 HVprog2 is an Atmel STK500 clone for programming in HVSP/PP, ISP, TPI, and PDI. This post explains how to use HVprog2.

Note: This and the previous posts are nothing to do with GoPro nor genlock. These discuss some programmers for AVR microcontrollers.

In the previous post we showed a hardware/software mod of original Atmel STK500. Inspired both by Atmel STK500 and its mod we designed a clone programmer called HVprog2.

There already exists another hardware clone of Atmel STK500 whose name is HVprog, and it claims to be able to program in HVSP/PP and ISP. HVprog2 is an improved version of HVprog, thus it has a similar name, and it can actually program AVR chips not only in HVSP/PP and ISP but also in TPI and PDI.

The below is a comparison chart of AVR programmers:

Note 1: STK500 mod is simply made of original STK500 with few chips removed/replaced.

Note 3: In order to recover the reset disable fuse the target voltage must be controlled. HVprog lacks the circuit for this, thus it’s impossible to unprogram the fuse bit. Moreover, examining STK500 and HVprog schematics we can find the former inverts XTAL1 signal but the latter where the same firmware is used. As a result, the inversion cause timing problems in every session and makes HVprog unreliable.

Here is the schematic of HVprog2: If you are going to use ScratchMonkey exclusively then IC2 74HC165 and its bypass capacitor C3 can be omitted. These parts are for hardware version identification only by Atmel’s firmware.

We recommend you to use a DIP IC socket for IC1 because it enables upgrading/swapping the microcontroller in the future.

The following image is a copy of HVprog2 using PCB sold in our shop. The PCB is designed for thru-hole electronic parts wherever available, and is easy to assemble/solder.

The 6 pins marked JP1 (top right) are for PC connection conveniently aligned for using ubiquitous Sparkfun FTDI breakout board or its clone: If you use 5V version of the breakout then the whole HVprog2 programmer runs in 5V logic, and this is necessary to program in HVSP/PP or TPI. Or using Sparkfun’s 3.3V version then HVprog2 is also in 3.3V logic that matches PDI programming.

The 20 pins marked HV_PROG (bottom right) are for target connections. These pins are ordered to be compatible with those of AVR Dragon. This means we can refer AVR Dragon’s comprehensible documentation for wiring/breadboarding in HVSP/PP.

To burn a software JP2 on HVprog2 board must be set to 1-2 (SELF). Then connecting another ISP programmer to 6 pins marked ISP (near center left) will do the job.

As already stated in the above there are currently two possibilities for HVprog2’s firmware depending on which microcontroller is installed:

Case 1. Atmel’s original firmware is included in any Atmel Studio 4/5/6/7 packages: The name of the binary is STK500.ebn but the file format is not usable with a usual programmer such as avrdude. We need to convert its format “.ebn” to “.hex” using EBN2HEX.exe before burning the binary to the microcontroller (please google and find a download site for EBN2HEX.exe as we cannot find its official webpage). For your information we set ATmega8535’s fuses as S8535C and CKOPT unprogrammed, SPIEN programmed and SUT_CKSEL=”Ext. Crystal/Resonator High Freq; Start-up time: 16K CK + 64ms”.

Case 2. We use ScratchMonkey. The preparation/compile/upload process is the same way described in our previous post.

HVSP/PP. In either Cases, to program in HVSP/PP we can follow the connections to target described in Device Connection Sheets, AVR Dragon’s manual: Refer the connector named HV_PROG.
Note: No need to connect VCC to JTAG as HVprog2 has no such connectors.

ISP. To program in ISP use the ISP connector (JP2 must be set to 2-3).
Note: The VCC pin on HVprog2’s ISP6 connector is always powered by FTDI’s VCC pin.

TPI/PDI. Since HVprog2 is a clone of STK500 or STK500 mod, avrdude requires to be modified as we did in the previous post.

To program a TPI microcontroller two external 510 ohm resistors are required. The HVprog2 board must be powered by 5V version of FTDI breakout board. And use the connection in the following schematic: To program a PDI microcontroller two external 510 ohm resistors are required. The HVprog2 board must be powered by 3.3V version of FTDI breakout board. And use the connection in the following schematic: (The parts included in dashdots are unnecessary.)

(The figure above is taken from Atmel’s original “STK500 component placement: STK500_asm.pdf”. And also the part numbers are adopted from “Atmel STK500 schematic: STK500.pdf”.)

So just connect another ISP programmer to newly installed J200 pin header and burn the firmware obtained from here (this link is ScratchMonkey’s fork of us but we expect our branch will be pulled and merged to the trunk soon).

and these are described in this post. The latter is usable with PC by connecting MewPro #0 to FTDI serial USB breakout and by sending commands from its console.

Shāndōng University – Virginia Tech researchers use a double dongle configuration, as I know so far, and also use a PC that is connected to MewPro #0 in order to control the whole system. (For their recent progress, a blog post is here: Matt Bender, Mincan Cao, Yu Wei, Shaoxu Xing “Tracking of Fiducial Markers for Bat Flight Motion Capture Experiments“)

To control the whole system from PC, today we added support for


(DTR connection between Dongle #0 and FTDI is for resetting Dongle #0 when uploading a sketch to the dongle or opening the Arduino Monitor in PC.)

As you can see this is the same to the single dongle configuration but GoPro #0 is replaced by Genlock Dongle #0 connected to PC through FTDI serial USB breakout board.

The no master configuration is completely symmetric and everything is PC controllable but there is no master camera that you might be accustomed to push mode/shutter buttons or to browse through menus on LCD.

How To Use No Master Configuration

You should follow the instructions for single dongle configuration first. And don’t forget to prepare/buy one more Genlock Dongle for Genlock Dongle #0 in the figure above.

You must update the dongles with the latest version of Dongle source code that supports no master configuration. It is always available at the GitHub repo.

For dongles the initial value of bool debug and the directive UART_RECEIVER_DISABLE should be set as follows:

(Bold face is the default in the GitHub source code.)

In this configuration usable commands from PC are those which are listed in the I2C command list and its label contains _BACPAC_.